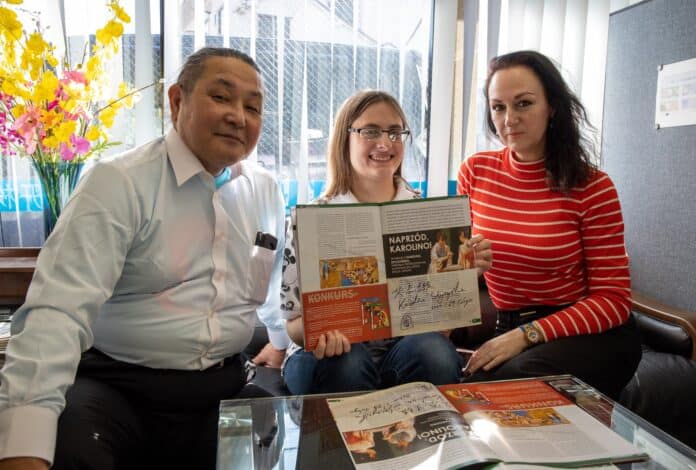 We had the honor of interviewing Karolina Styczyńska. She is a Polish women’s professional shogi player and the first non-Japanese to be awarded professional status by the Japan Shogi Association. During her interview she described how she came to playing Shogi, her adventures to visit Japan for the first time and her professional career as a non-Japanese Shogi master.

Karolina discovered shogi at the age of sixteen while reading Japanese manga. Her favorite: Naruto. She began playing online at a website called 18Dojo, refining her skills against competitors of various ages and nationalities from the world over. She was eventually noticed by women’s professional Madoka Kitao who was impressed by Styczyńska’s ability. Kitao invited Karolina to come to Japan for a two-week trip to study shogi in 2011 all expenses paid.

On May 19, 2012, Styczyńska participated in Women’s Oza Tournament wherein she became the first non-Japanese female amateur to defeat a women’s professional in an official game. In June 2013, Styczyńska became the first non-Japanese female to be accepted into one of the Japan Shogi Association’s training groups. In 2017, during her second year of graduate school, she was promoted to 2-kyu, achieving her goal of becoming a professional.

She wrote her master’s thesis on the internationalization of shogi, and after graduation played in an international tournament in Los Angeles in 2018—an event intended to popularize shogi overseas. As the game’s first foreign female shogi professional, she’s playing a huge role in popularizing the game worldwide, including introducing the rules of shogi in English on her website and publishing International shogi Magazine.

She is currently living in Tokyo, Japan and has been able to get used to the lifestyle and food. In addition to playing official matches, Japanese shogi professionals are involved in diverse activities to spread the popularity of their game, including teaching shogi workshops, writing books and participating in various events.

Styczyńska is currently under contract to a Japanese corporation that sponsors her—another noteworthy item on her resume since she is the first female shogi player to earn corporate sponsorship. As a non-Japanese shogi professional, she also teaches courses on the game in English. Her popularity in Japan, as well as overseas she, was honored to be an anime character herself. If you know Japanese culture well, you understand what a high honor that is. >> Check out her anime video <<

Shogi, also known as Japanese chess or the Game of Generals, is a two player strategy board game native in Japan. Shogi is the Japanese version of chess. While they share some common elements and strategic principles, they are really two different games.

The world has many games that resemble shogi. These games reportedly all originated in the game of chatoranga, which was played in ancient India. As that game spread to various countries, it was influenced by the history and culture in each. As a result, each country developed its own type of game from it. For Chinese style shogi, it is called xinagqi while the Thai-style shogi is called makruk.

Shogi owes its popularity largely to the excitement of “drops” — instead of moving a piece on the board, you can add a captured piece to your army by dropping it on an empty square. Because of this rule, which distinguishes Shogi from all other established Chess-type games, most of the pieces remain in play for the entire game. The objective of Shogi is the same as Chess — checkmate the king.

The Coronavirus, the economy and the Olympic Games in Tokyo

Sony Corp is the restructuring story of Japan

A Front Seat in Sumo Wrestling